This weekend I felt very lucky to get to spend some time with my school friends, meeting up to celebrate my close friend Alice’s birthday at her house in Wayne, New Jersey.

It was only my second time going to New Jersey, the first time was also to visit her the previous year for her birthday party. She had invited my friends Jordan and Amanda from school, as well as her close friends from home.

I arrived at her house on Saturday around 12:40 pm. When I got there, almost everyone else had already arrived. We waited for the remaining people to trickle in and then got changed into bathing suits to go down to the lake. It was a two-minute walk from her house to Pines Lake, where Alice also works as a lifeguard.

It had been a really long time since I had swam in a lake because we don’t have many near my house that are accessible to the public. The group of us divided up into smaller pairs, some people setting out paddle boats, others taking to the water to swim out to the dock.

I was in the group who decided to go swimming; the water was refreshing and cool, since temperatures were in the high 90s that day. We swam out to the floating trampoline past the buoys to lounge and tested out the water slide on the dock. All the while, we caught up with each other on our summers so far. After a few hours passed, we came in and laid out on the shore to dry off and take some photos of our surroundings.

Around 4:30 pm we departed to make our way back to Alice’s house. There, we ordered Mexican food from Moe’s and began planning the night’s desserts. Alice wanted to organize a competition based loosely on the cooking show: Chopped where two teams competed to make her a birthday dessert.

When we got back to Alice’s house, the food had arrived, so we ate dinner to fuel up before the competition. My chips and guacamole with chicken tacos were delicious.

We then proceeded to begin the cooking competition. Our team laid out balls of cookie dough combined with rainbow sprinkles in a shallow glass pan and then smushed one Oreo on top of each ball. From there, we added the brownie mix as a top layer. We baked this for about twenty minutes until the brownies rose and then added a layer of mini marsh-mellows and put it back into the oven for another twenty minutes. Meanwhile, the other team layered their ingredients in a plastic container to transfer to the freezer.

After our dessert was baked we added crushed graham crackers on top and googly eyes with a tongue sticking out in the center. The other team ended up creating a surprisingly lifelike representation of Alice’s dog in icing on the top of their concoction; one of their team members was an animation artist, so there was a bit of an advantage there. Both the finished products are pictured below.

Before we completed the final touches on the desserts, we went back to the lake for a neighborhood bonfire and S’mores. The sunset was beautiful on the water and the night felt serene. The pictures below hardly do the moment justice. 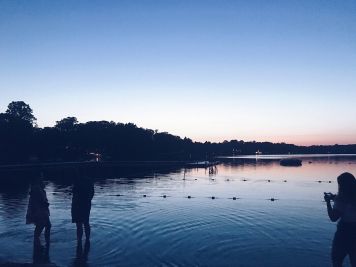 When we came back to the house, we revealed our desserts for Alice to give her verdict (we won for taste and the other team won for presentation). We sang her happy birthday and then feasted on the brownies we had made.

Finally, we took time to open gifts before bed. I got her a silver friendship bracelet engraved with the words “you are my sunshine,” funky, red cat-eye sunglasses, a face mask, and a photo book I made of the two of us. She seemed to love everything she received. By the end of the day I was exhausted, but so happy that I had made the trip out.

The following morning, I rose around 9:30 am, along with the majority of the others who slept over. Alice and her mom took our bagel orders for breakfast. I got an everything bagel with plain cream cheese.

We ate breakfast at the table along with our choice of tea or Keurig iced coffee with caramel syrup (it was a surprisingly good combination). We also ate some more of the desserts from last night once we finished because there was so much left over. After saying my goodbyes, I set out to go home around noon. The drive took me three hours in traffic, but passed quickly since I had a good playlist on.

It was lovely getting out of Connecticut for the weekend and seeing a state I don’t often get to explore. I enjoy traveling because I truly feel like every place has something unique and interesting to offer. I can’t wait for more trips in the near future to Boston, D.C., Utah and Wyoming with family and friends 🙂